Campaign of the Month: November 2020

……………….. The Crew has retreated into the Shadow Dimension to lick their wounds. They were set up by Barys Hargron! Now they are wanted across the Outer Regions for crimes they did not commit. Will they be able to clear their names and avoid the hoosegow? Stay tuned… Hazard Pay will return! 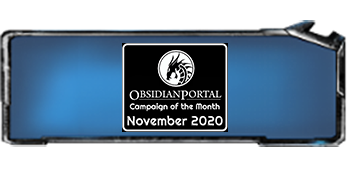 Long ago, there was an age of enlightenment and civility. Sentient species lived in harmony and equality within the Galactic Empire.

Then, the First Sorcerer came, with great power given to him by The Void. He became the new authority, and anyone who would defy him was destroyed. Thus began the Cleansing Wars, and the shattering of the Galactic Empire.

But his most potent warriors betrayed the First Sorcerer, consumed by their own lusts for power. They obliterated him, and continued his war of dominance.

Thousands of years later, the Galactic Overlords have won.

The universe lies in ruins, split into broken sectors and ruled with iron fists by the conquering Overlords. They have established control over every aspect of life in their sectors. Technology, communication, knowledge… all suppressed to ensure their rule. Only the farthest reaches of the galaxy have escaped their domination.

Signs of the lost past remain, for those who look hard enough through the dust and debris of today’s galaxy. On most planets, ruins can be found with strange and advanced devices inside. Giant structures lie abandoned in faraway regions of the galaxy.

Some brave (and perhaps foolhardy) folk face the hazards of the lost and unknown in the hopes of vast rewards.

@twiggyleaf thank you very much!

Congratulations to Dropbeartots and team for winning Campaign of the Month November 2020.

holy shit this page is beautiful

I originally left the maps section off of the navigation so I could get folks to focus more on the pages themselves, but I may reconsider that because you do have valid points there.

Brilliant! You might also benefit in the future from putting a Map into the maps section, which can be made as an interactive section. To get an idea of what I mean, have a look at my Map here: https://mysteria.obsidianportal.com/maps/37228 You can set up icons with titles, and link to further information. It may not be something you choose to do, but many people don’t even know it CAN be done.

Thank you! Never fear, I am working on more maps. Most of the places on the Outer Regions map are systems rather than a single planet (except for Chance and the anomalies), like the Kaantiz Confederation. As the players explore each system, I will post the appropriate map on its page. The big planets on the pages now are mostly placeholders for those upcoming maps!

Great design. Good navigation. Love the choice of fonts. Adventure Logs very interesting. Your OUTER REGIONS map is great but I would like to see more maps. Art seems pretty good throughout. And I totally loved the “MOST WANTED” poster describing the key Player Characters. Keep doing what you are doing with this site. The hover effect on the PC icons is brilliant too!

I'm sorry, but we no longer support this web browser. Please upgrade your browser or install Chrome or Firefox to enjoy the full functionality of this site.